Round two of the British Short Circuit Championship saw the track team arrive to a perfect PAR Raceway track. Paul Rowlands and his team had the race surface in fantastic condition for what looked to be a great weekends racing. All the big hitters in all three classes were present and many of the classes could have been won by several drivers. A strong start to what turned out to be one of the most challenging races in many years.

First out on track were the Open Class and the weather was already starting to show signs of turning for the worse. Jason Rowlands looked to carry on his form from round 1 and posted the fastest lap of the session on his first flying lap. Could this be a sign of things to come for the day? Jamie Thwaites in his first event of the year followed Jason in with both drivers split by only hundredths of a second. Paul Severn grabbed third place with concerns over machine health still looming, however a good solid lap held Paul Rowlands off in fourth. Shaun Jenkinson was first of the non-turbo charged machines showing that the Open Class really is Open so well-done Shaun. Miles Radburn marked the back of the experts in sixth place with some rookies nipping at his heels. Andrew Postlethwaite secured seventh spot with Jed Weigold and Joe Robinson eighth and ninth. Nathan Bath and Neil Davie closed of the back of the grid in what was a very competitive session. If only those conditions had held out.

Race one saw the Open class take to the track in very different conditions. Torrential rain had started to fall and conditions were going to challenge even the very best of the wet drivers. Jason Rowlands lost places in the early laps which saw a battle at the front develop between Paul Severn and Jamie Thwaites, it looked like the joker lane may play a part until visibility issues saw Thwaites retire. Paul Seven was clear then for the race win followed in by Paul Rowlands who worked his way through from fourth with a skilled drive for the conditions. Andrew Postlethwaite grabbed third beating many far more experienced experts home with Miles Radburn and Neil Davie fourth and fifth. Shaun Jenkinson again was the first of the 1000s in followed home by Jed Weigold and Nathan Bath. Joe Robinson and Jason Rowlands marked the last of the finishers in what was probably their most challenging race of the year.

The conditions for race two had continued to deteriorate as torrential rain continued to fall which lead to some not even making the line. The battle at the front seemed destined to be a battle between Paul Severn and Paul Rowlands. Paul Severn held the front for the majority of the race but text book use of the Joker Lane saw Rowland’s take the chequered flag. Paul Severn took second in a very positive result considering the loss of power his machine faced. Shaun Jenkinson climbed the field for third place followed in by the fastest of the Rookies Nathan Bath. Miles Radburn marked the last of the finishers as Joe Robinson feel victim to the Joker Lane. Andrew Postlethwaite, Neil Davey and Jedd Wiegold feel victim to mechanical problems in what would be the last session for the Open drivers. 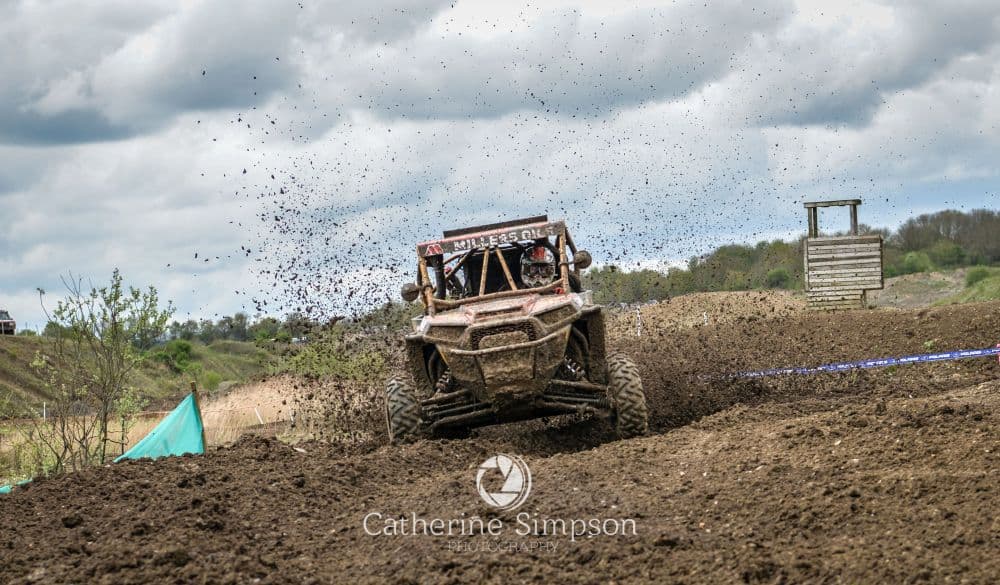 This class looked to be one of the most competitive with the all big hitters taking to the line. Again, their first session saw perfect race conditions but the weather was already starting to take effect and challenging conditions were already on the cards. The McPhee brothers lead the way grabbing first and second spot split by the finest of margins. Chris McPhee grabbed the top spot from brother Mark by less than three tenths. Rob Tunnah was next in taking third spot closely followed by Scott Fischer in fourth. Gary Smith secured fifth place but would see his day end as mechanical issues haunted him. Anthony Hope finished middle of the pack in sixth on the same second as Gary Smith and would start fifth after Gary’s misfortune. Gary Gravell and Cameron MacDonald were next in marking seventh and eighth place with Andrew Langdell closing off the grid in ninth. A good session which looked to set up a fantastic race one but the weather looked to have a say in that.

Race one seemed to set follow qualifying as the McPhee brothers broke from the front and held their positions throughout. Chris McPhee took first place followed in by brother Mark who set the fastest lap of the session. Kieron Weaver after failing to post a qualifying lap charged through the pack to finish third with Scott Fisher fourth. Mick Edwards also had mechanical problems early on but crossed the line a strong fifth, a great result considering his early problems. Gary Gravell found the conditions challenging and was only able to finish sixth with Cameron Macdonald enduring some unbearable roost to grab seventh.  Andrew Langdell marked the last of the finishers in what was a very difficult session due to the rapidly deteriorating conditions.

Race two would see a shift in the pack, Chris McPhee broke from the front and wouldn’t be troubled all race. Kieron Weaver got the better of Mark McPhee and Mick Edwards to take second place followed closely by Mick Edwards building on his race one result. Mark McPhee lost some places dropping down to fourth but another solid haul of points would prove valuable as the class heats up. Gary Gravell was fifth home with Anthony Hope sixth the conditions clearly affecting those further down the field with visibility problems. Closing off the back of the pack was Cameron MacDonald and Scott Fisher ending what was a very challenging session. 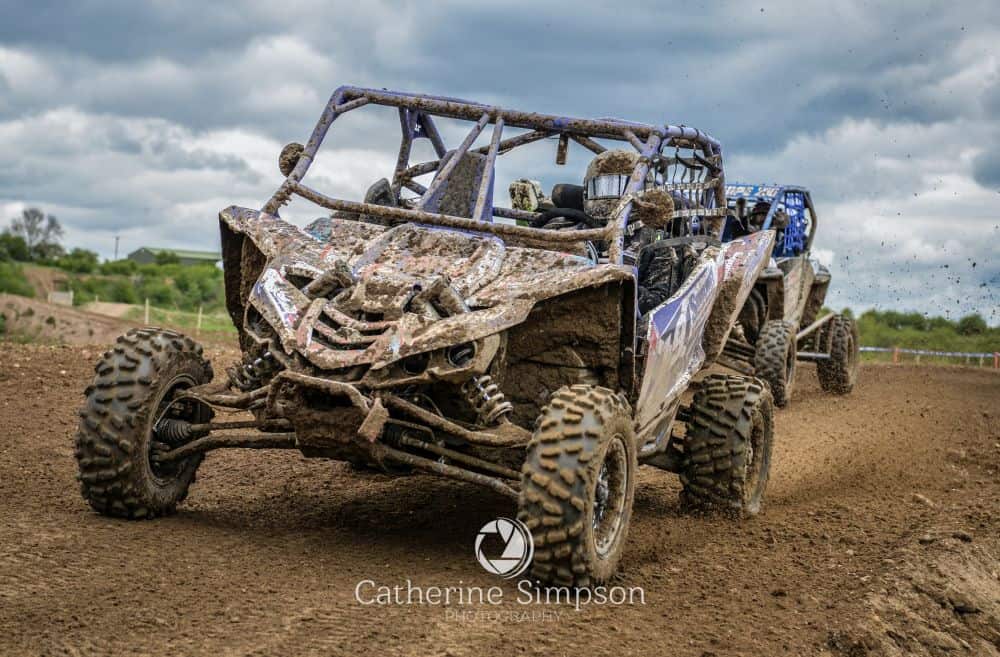 As always, this class was going to be fiercely competitive and the conditions were definitely going to have their say. Joe Bennett threw down an early marker on his second lap that would be enough to secure top spot. The battle everyone was watching developed in behind with Richard Avis getting the better of Tom Fletcher to grab second with Tom only hundredths behind in third. Paul Rowlands closed off the top four with Robert Lloyd fifth by only tenths of a second. Josh Hope climbed the field in his first expert year grabbing sixth spot beating several experienced experts in the process a great result for Josh. Lewis Fletcher seventh and Gary Tarrant eighth again were split by only tenths showing once again the strength in depth of this class.  Bailey Edward’s pipped Claire Avis to ninth with Adrian and Callum Loveridge the last of the qualifiers. Another fantastic session for the 1000 Experts showing just how much talent this group holds.

The condition by now were extreme to say the least and the continuous rain would have its say on this race result. The pack was mixed up early as Tom Fletcher charged top the front a position he would hold throughout the race. Richard Avis kept him honest and laid down a marker with the fastest lap of the race setting up a battle for race two. Lewis Fletcher made the condition work for him as he pushed up the pack to finish third followed in by Paul Rowland’s both with near identical fastest laps. Claire Avis also made good use of the conditions to climb to fifth holding off Robert Lloyd in sixth and well-timed Joker by Claire could have been the deciding factor in that one. Josh Hope lost a place but manged a solid seventh in this ultra-competitive filed. Gary Tarrant and Bailey Edwards crossed the line in eighth and ninth marking the last of the finishers in what were brutal conditions.

Race two would again see the pack mixed dramatically. Tom fletcher set off in first but almost immediately tumbled down the pack due to mechanical problems. Richard Avis grabbed the opportunity and set about building a gap at the front which he maintained for the race win. The performance of the race was by second place Mark McCann and Jayne Ind after moving through the pack from last to second, a great achievement from the back of a field like this. Bailey Edwards again took full advantage of the conditions with a fantastic drive to third place. Paul Rowlands closed off the top four with his interesting windscreen having a positive effect on his visibility. Claire Avis moved up the field again from race one as she again pipped Robert Lloyd in the battle for fifth place. Adrian and Callum Loveridge had some hairy moments as they persevered to seventh spot. Tom Fletcher battle on to grab some vital points finishing in eighth after machine problems seen him tumble down the pack. Gary Tarrant was the last of the finishers closing off a challenging days racing.

After block two of the days racing it was decided to abandon the meeting for safety reasons after some potentially dangerous incidents in the final race. The areas of the track that were drying out was allowing the cars to carry more speed into the saturated areas, this added to the horrendous visibility made the decision by the team an easy one. Meeting Abandoned! 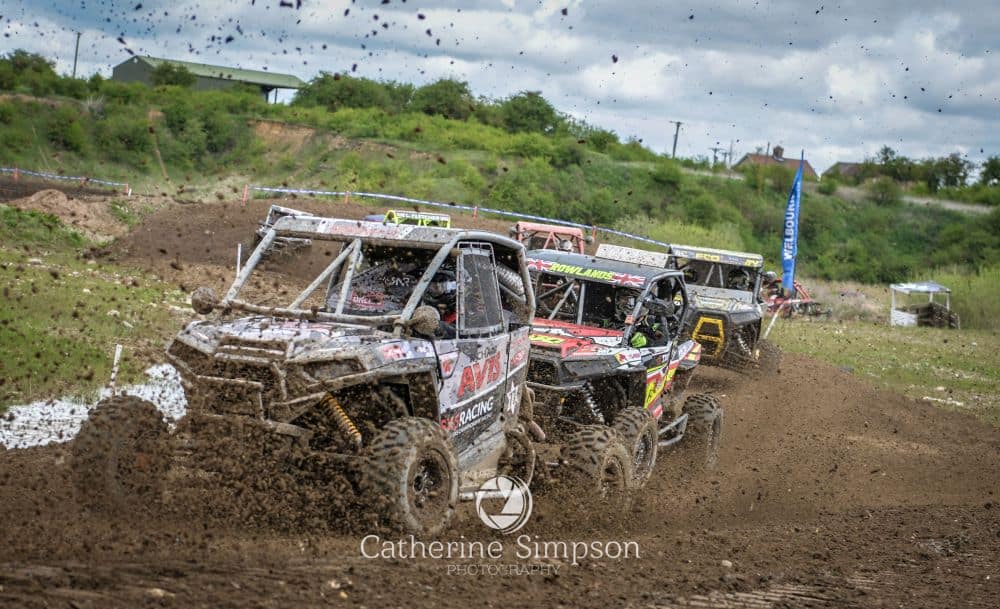 Check out our results page for full standings HERE.

As always, a huge Thank You to everyone who made the event possible especially Paul Rowlands and the team at PAR Homes for again delivery a fantastic track and venue. Ray Barton from the MCF for covering timing and to all our sponsors, without them none of this can happen.

See you all in two weeks for BEC Rd2