The weekend saw the sun shine on the second round of the British SXS Short Course Championship, held at PAR Raceway close to Llandrindod Wells in Wales. First up on the Saturday was the Youth races along with the adult qualifying and the all new dash for cash Hot Lap session.

Having qualified fastest and gained pole it was Lewis Scotney that got away at the front of the youth pack for Moto 1 with Mack Priestley hot on his heals, Priestley made his move on lap 4 putting his Polaris ace out front and went on to take the win. Scotney secured second whilst Rio Longdon moved ahead of Alfie Davies on lap two and was running third, Davies didn’t give up the chase and retook third with two laps to go. Starting from pole in race two it was Priestwood that took and start to finish victory. Scotney was battling with Longdon for second and it was Scotney that secured the place on the last lap. Moto three once again saw Priestwood make the most of the pole position and this time out Scotney made certain of second. Davies was down in fifth at the end of the first lap but was in determined mood and made short work of Ty McPhee before setting off after Longdon. Within three laps Davies was pressing and made the move to third place at just over half distance.

It was Priestwood that took the overall with a maximum point haul ahead of Scotney with Davies filling the final podium places for the round.

The adult qualifying sessions took to the circuit following the youth presentations with the Open class out first. The track was improving throughout the session with the lap times dropping throughout. Mark McCann in the FRO Polaris set the quickest time of 1:51.494 on his sixth lap, 1.423 seconds ahead of surprise second place drive Tom Morgans. Andrew Postlethwaite, Paul Severn and Paul Rowlands were all within 0.2 of a second of each other a further second and half adrift setting up the grid for Moto 1 on Sunday.

Next up were the 1000cc Expert class and with a cross over of some drivers it was Rowlands that got the better of McCann taking pole with a 1:54.078, just 0.03 seconds between them. Brothers Lewis and Tom Fletcher battled it out for third and fourth, just over a second behind.

Third out were the Rookies, drivers with less than two seasons under their belts and it was Jed Weigold that came out on top with a 1:55.565, a whopping 2.5 seconds ahead of Chris Place with Kieron Weaver a further second back.

Morgans made the best start for Open Moto 1 on a sunny Sunday morning taking the lead from McCann, Rowlands put McCann under pressure early on and took second place on lap two and set off after Morgans. McCann suffered from overheating on lap three and was side-lined whilst Morgans had his own issues dropping from the race at the same time. Rowlands had taken over at the front, but it was Weigold making the move, coming from a first lap seventh to second. Adrian Loveridge, with son Callum alongside, drove a sensible race picking off places to take over third which is how they crossed the line. 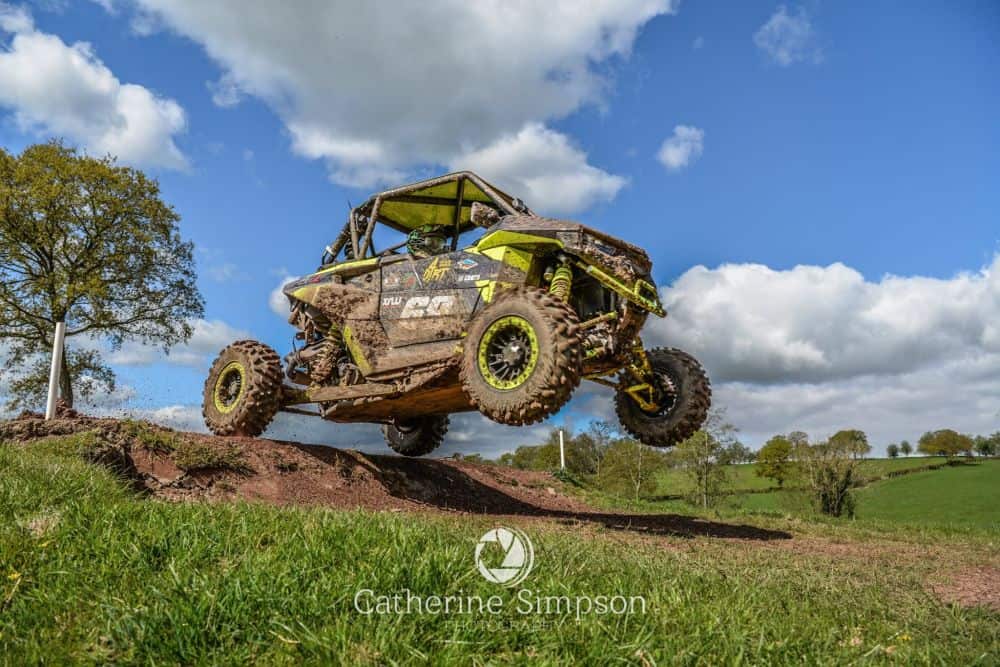 With Moto 1 determining the start order for Moto 2 there were going to be some quick drivers at the back of the field. Rowlands got away ahead of the pack and held on to the lead until the end, in the meantime McCann was up to sixth at the end of lap one and shot through to second place by half distance only to suffer the same gremlins as Moto 1 demoting him to limp round for points. Paul Severn made steady progress and was looking good for second place but was under severe pressure from Weigold, when Severn machine started to back fire. They came out of the last corner side by side when Severn’s engine cried enough leaving Weigold to cross the line with a half second advantage with Loveridge in close attendance in fourth. 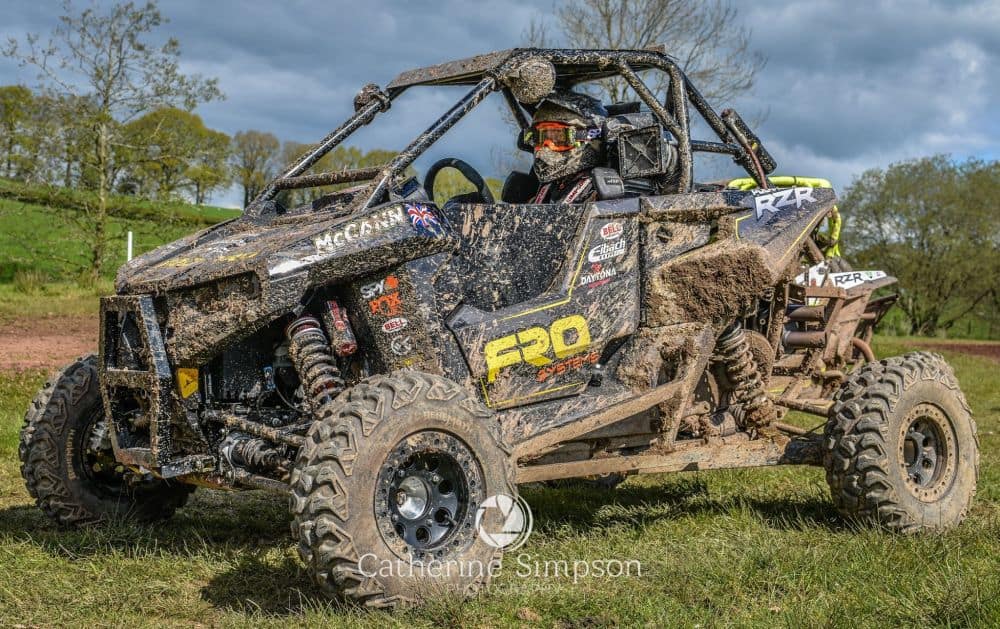 Rowlands once again took full advantage of pole position, but McCann was on determined form setting the fastest lap of the race in his charge through the pack taking second place within two laps. After a poor start Weigold was back on the pace and caught and passed McCann, along with Loveridge, on lap five. Loveridge was looking good for a podium until he was left on the side of the track with just one lap to go. Rowlands took the overall with a maximum score in the Open Expert class ahead of Shaun Jenkinson and Dave Riley. Weigold secured the Open Rookie win ahead of Neil Davey and Andrew Postlethwaite.

Rowlands was back out in the 1000cc Expert field and continued to take home track advantage heading Moto 1 from the start, Lewis Fletcher wasn’t going to let it be an easy win however and having moved up from an early fourth put Rowlands under pressure passing the chequered flag less than half a second adrift. Chris McPhee made the most of others errors and misfortunes and took a solid third place ahead of Jason Rowlands in the second PAR buggy. 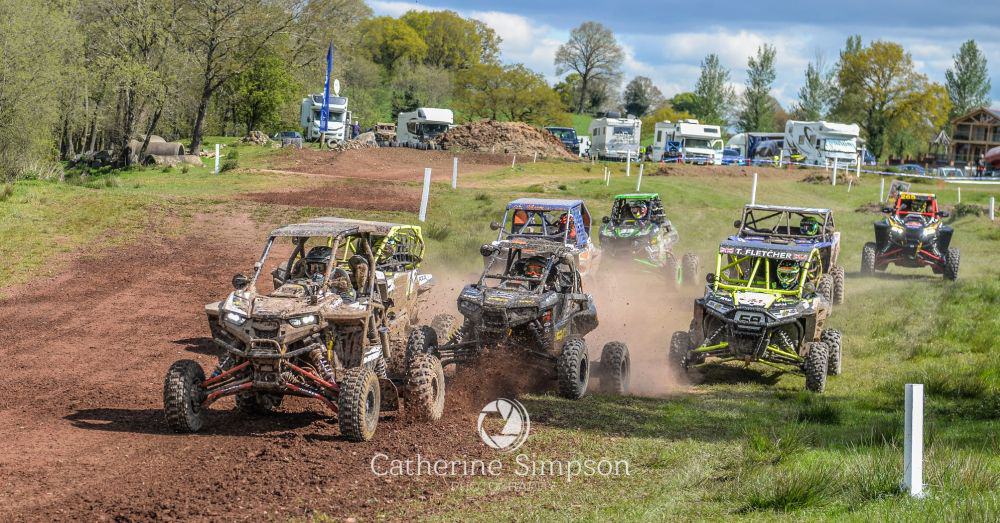 Rowlands was on top form and once again made the most of starting at the front, taking a flag to flag victory. McCann and Lewis Fletcher were battling it out for second with Fletcher taking the place at the line from McCann with Jason Rowlands once again in fourth.

Paul Rowlands made it a clean sweep for the weekend with another faultless drive in Moto three although this time with Tom Fletcher keeping him honest to the end, crossing the line just 0.3 of a second behind. Lewis Fletcher took third whilst McCann limped around for points after an early roll damaged a front drive shaft. 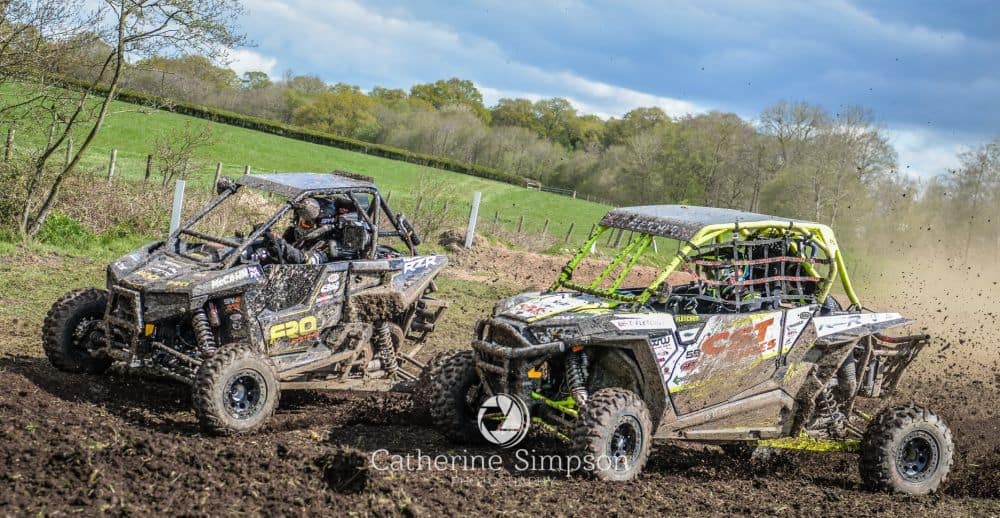 Rowlands was on top of the podium with maximum points for the round, ahead of Lewis Fletcher with Chris McPhee taking third.

Having set the pace in qualifying it was no surprise to see Weigold lead the field round at the end of the opening Rookie moto lap ahead of Chris Place with Keiron Weaver hot on his heals in third with new driver William Buller in fourth.  Weigold romped away to take the win by 16 seconds leaving Weaver to battle through to second ahead of Place and Buller. 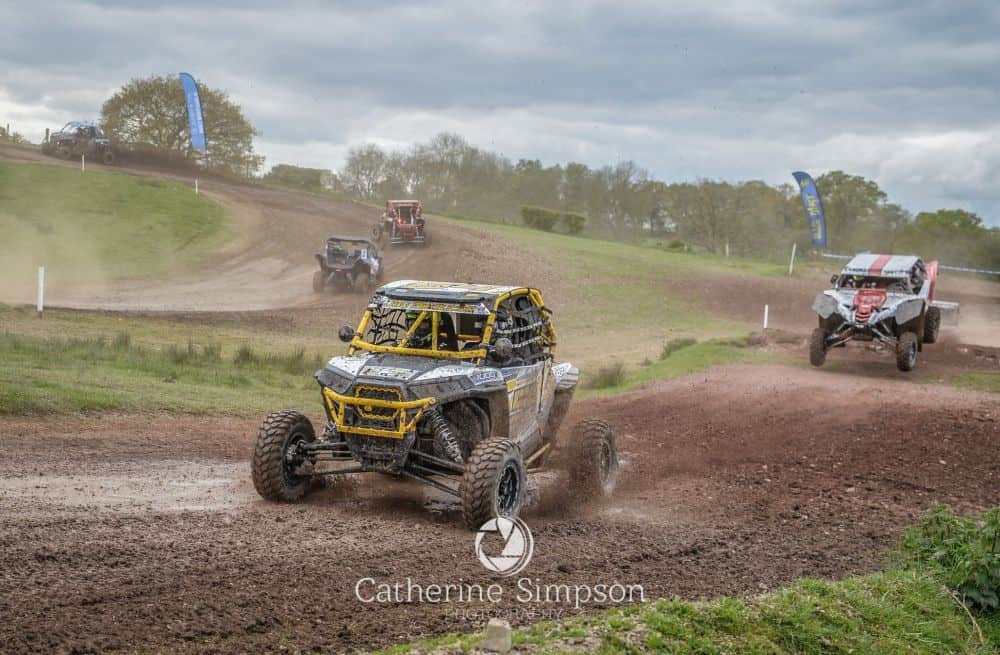 Weigold had the pole for Moto 2 and once again showed himself to be the class of the field taking a bigger win than in Moto 1. Weaver and Place once again took second and third with the pairing of Mark and Lewis Scotney crossing the line in fourth. 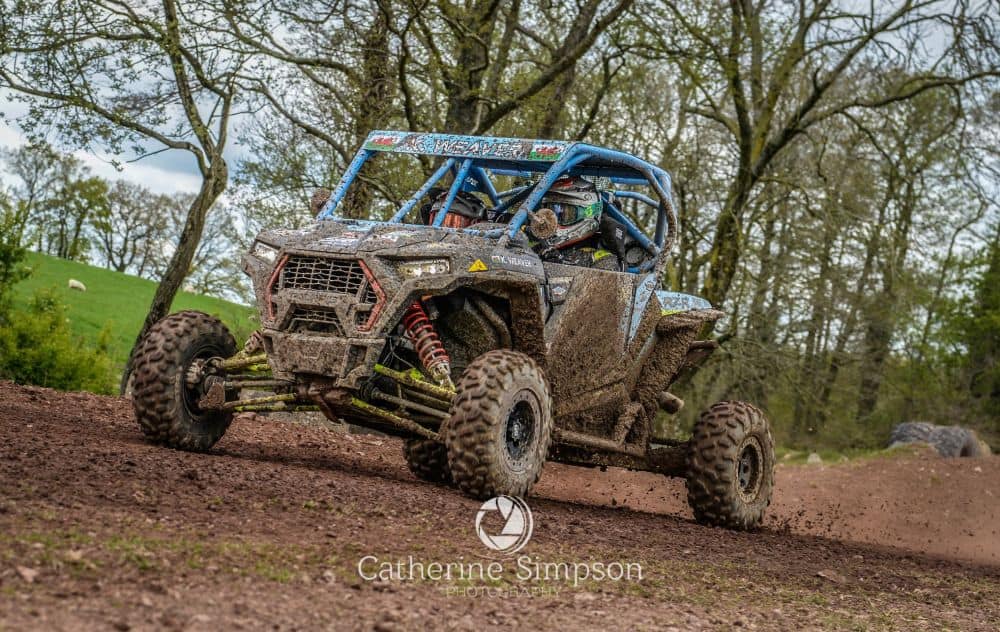 Chris Place was on top form in the last moto of the day and set the fastest lap of the race with a 1:53 and made good use of the fact that all the drivers had to complete the Joker Lane once a race to put himself out front. Having come through from third he took the win from Weigold with Weaver in third. 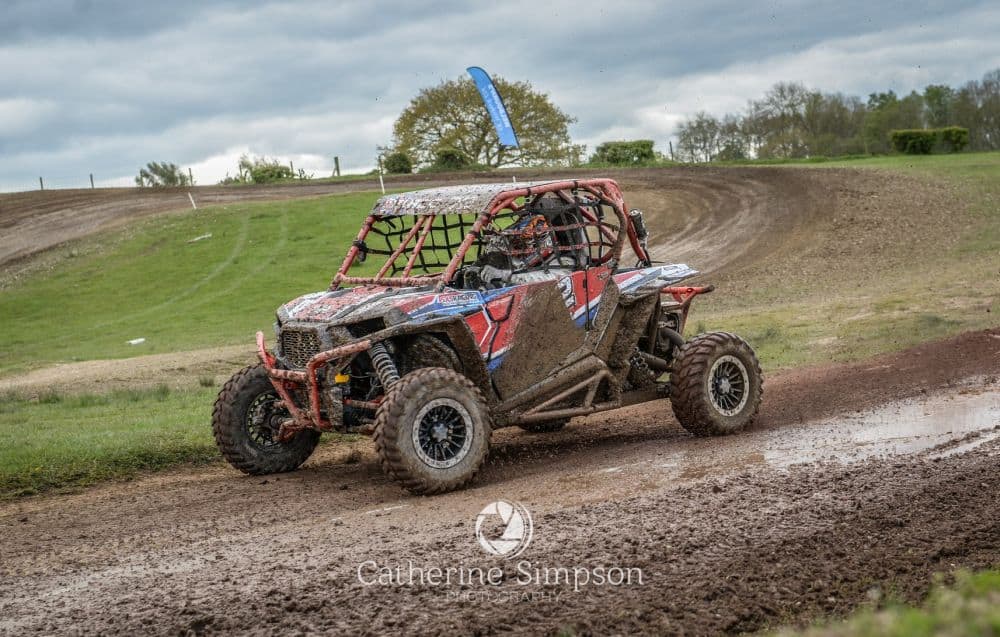 Weigold managed to take the overall at the end of the event with just one point separating Place and Weaver in second and third.

As an addition to round two all the drivers, including the youth, had the chance to take part in a hot lap qualifying session. Each of the 27 drivers that took part had the track to themselves to do a sighting lap and one flying lap. All the entry money was paid back to the fastest drivers per class in prize money. Mark McCann went out in his Open Class and 1000cc machine and managed to set the fastest two lap times taking the spoils in both classes, his fastest time being an amazing 1:46.784, a full 5 seconds quicker than any time set in normal qualifying. Jed Weigold took the Rookie win with Mack Priestwood first of the Youth drivers.

With Colin Martin, the organiser and Clerk for the events suffering a back injury during setting up, there was a question about the event running. With everybody pulling together and working as a team the event went ahead as normal and a big thank you go out to all involved. Special thanks go to Michelle Scotney and Gill Lloyd for giving up their days to manage the paddock and holding pen and to Charlie Welbourne for giving up his weekends racing to help on track.

Next up for SXS Racing is the Youth and Adult Short Circuit Championships at Nuedd Farm, Llandrindod Wells on June 1st and 2nd.