Last weekend saw the SXS train pull into Kirton Off Road Centre for Rounds 2 of the British Enduro Championship and British Youth Championship. Everyone knew this would be a challenging event for both driver and machine. The intention was always to build a big lap and a strong but compact circuit for our youth racers. The youth track was easy, using a compressed version of the MX Track to create some fierce racing. That said the big track was going to be a huge challenge and some long hours were definitely on the cards for the track team.  Some kind weather and a good team soon put that right. Racing was a GO!

This session was always going to be about trying to bridge the gap to the flying Lewis Scotney, the others had a good go but he was not for being caught. Throwing down fast laps from the outset Lewis got faster lap after lap, and secured pole for race one. Rio Longdon chased hard but was only able to take second spot, visible improvement from Rio on every lap as he progresses in his rookie race year. Fred Tarrant was next over the line in third place with only half a second splitting the two youngsters. Kiean Wiegold took fourth spot in his first ever youth race battling the whole time with a faulty power steering unit, so well done Kiean.

Race one saw Lewis Scotney bolt from the front and never look back, a confident drive with some impressive passing of back markers showing the talent of this young man. Some brave lines executed with precision shows that practise really does pay off. Rio Longdon worked hard and did manage to reduce the lap difference between himself and Lewis. A strong performance from Rio in only his second competitive event. Kiean Wiegold grabbed third spot after some errors from other drivers opened the door. No doubt there is some talent there and his next event we will expect to see more improvements. A great addition to youth racing. 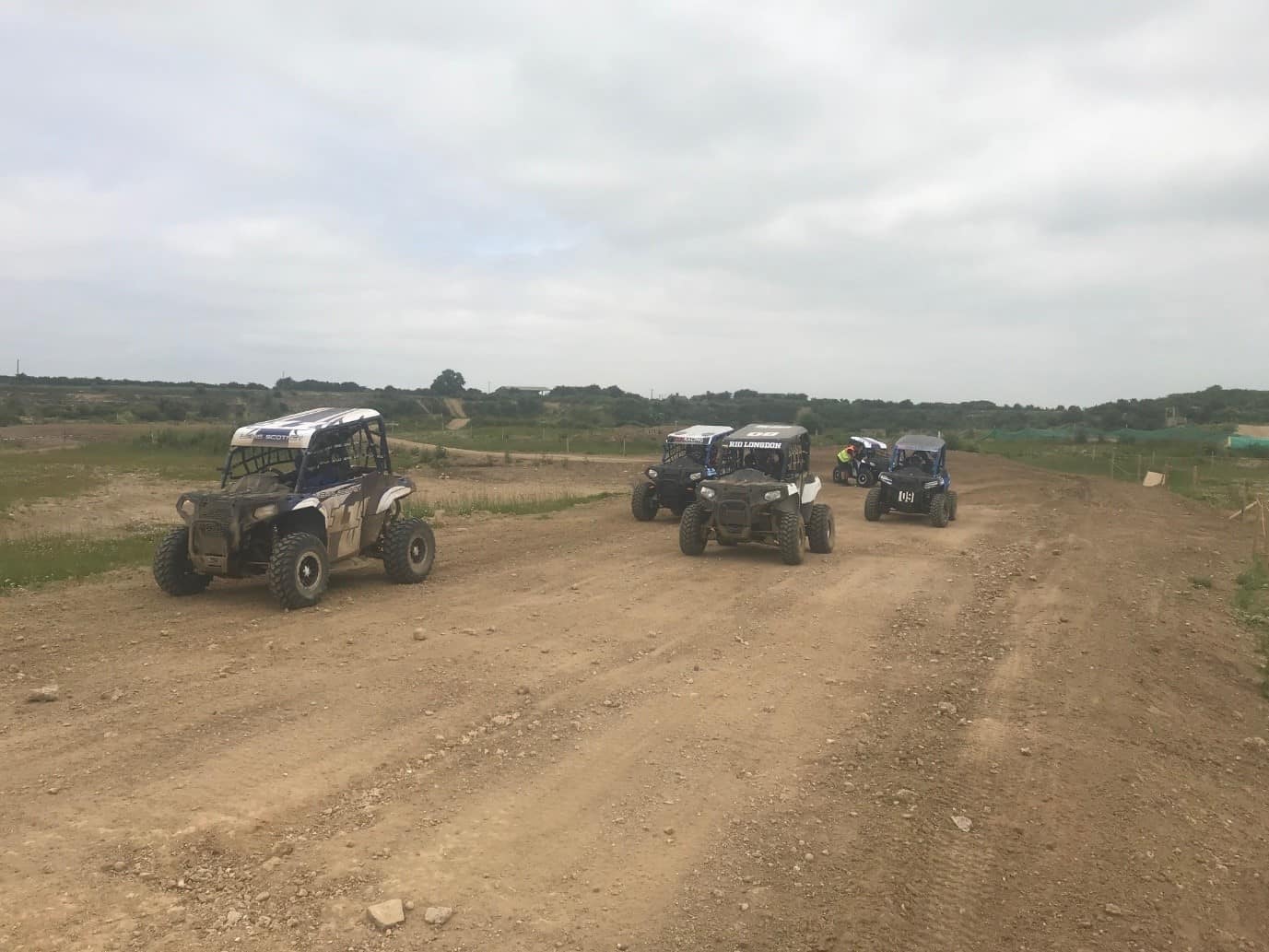 Fred Tarrant made some errors as he pushed to catch second and hold off third, a trip to the mud and a few seconds stuck cost him third spot, but as with any racing you only make mistakes when your pushing hard so keep up the good work Fred.

Race one saw the first appearance of Jude Scotney, the youngest racer in the field worked hard to get over his nerves and probably surprised himself during the race. Great use of the track kept him out of the faster lad’s way and his pace improved with every lap. A huge deal for someone so young and his presence on the grid brought smiles across the paddock. Fantastic effort Jude looking forward to your next race in a bigger field.

Race two was more about the battle in the midfield. Lewis Scotney again dominated with Rio Longdon on his coat tails in the early laps. Rio again solidified his grasp on the second step of the podium and grew in confidence as he progressed through the back markers. Fred Tarrant and Kiean Wiegold were the ones to watch this race as they battled hard for third spot, Fred Tarrant got the better of this one as they battled all the way to the flag. This set up a last race showdown for the third spot on the podium. Jude Scotney grew in confidence and improved his pace lap after lap and I think secretly his confidence too. A great race and a last race shootout to come. 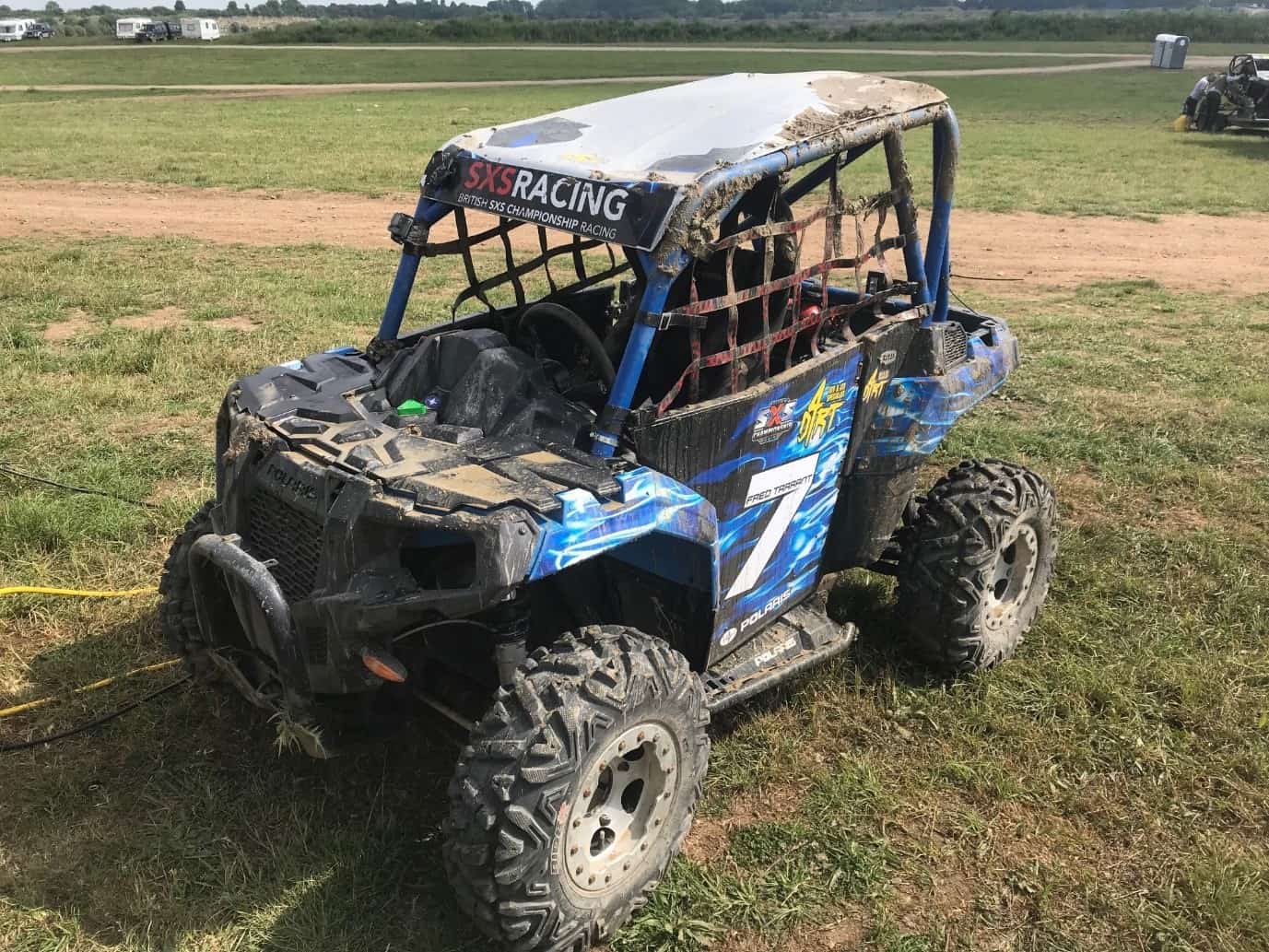 Race three was a tense one with all eye on the battle for third and fourth. Lewis Scotney was again dominant and broke away clean at the front. Rio Longdon held second as his passing confidence grew. The battle between Kiean Wiegold and Fred Tarrant bubbled up lap after lap and nobody could split the pair. Then in a dramatic twist Fred left the track in the most spectacular away releasing Kiean for the third sport. Hats off to Fred Tarrant for showing the spirit of a racer and getting back in the machine to finish the race, the lack of damage to the machine just proves the durability of the machines in this great sport we are trying to build. Jude Scotney crossed the line to take fifth spot in a day that was all about confidence. A great days racing enjoyed by both drivers and staff. 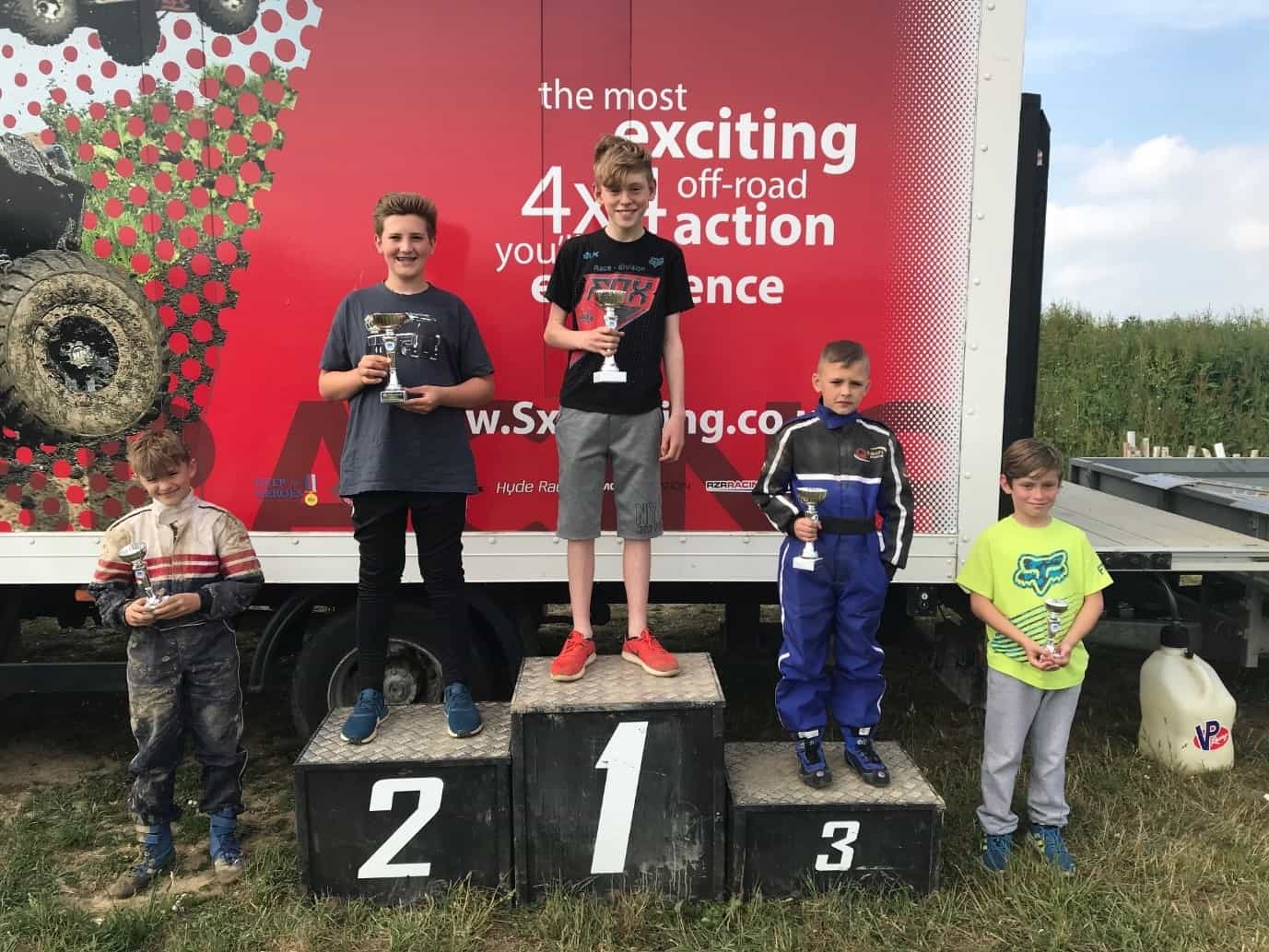 As a treat for a great day racing the boys then embarked on a site safari lead by the marshals covering fifteen kilometres of tough terrain which was a lot of fun to end a fantastic day.

As always, the SXS Team would like to thank everyone who made the day possible especially the classes main sponsor Anglia UK.

The senior race was always going to be challenging, the terrain and the nature of the venue meant that endurance was the word of the day. A seven plus kilometre lap meant that one race was the preferred option. The track prep was complete the entries were in it was time to go racing.

As always, the day started with a sighting lap for all the racers, an extended gap between this and race start allowed ample time for adjustments to be made to machines to suit the conditions and terrain. This complete, it was time to take to the start line. After a clean release of all machines it became obvious that dust was going to play a large part in the races outcome. Race craft and picking the right time and place to pass would be critical and those getting it wrong certainly suffer. A strict blue flag policy and no passing zones added to the complexity of the lap as the racers took to the track.

The Open experts ran with a depleted field this weekend and Paul Severn seemed to be the one tipped by most. However, Pauls bad luck seemed to continue, and mechanical issues saw him only able to take second spot, this after a tough day of nursing his wounded machine around the difficult lap. This good fortune and his own strong performance saw Dave Riley take full advantage of the opportunity in front of him grabbing the race win after two very tough hours on track. A well-deserved win for Dave after some unlucky days at past races. Shaun Jenkinson whilst suffering with motion sickness almost gave up but the end of race was to close and he pushed on for third in class. Miles Radburn was unlucky after a minor mechanical failure saw him DNF but the championship stays close with another winner keeping things tight. This one will go right to the wire. 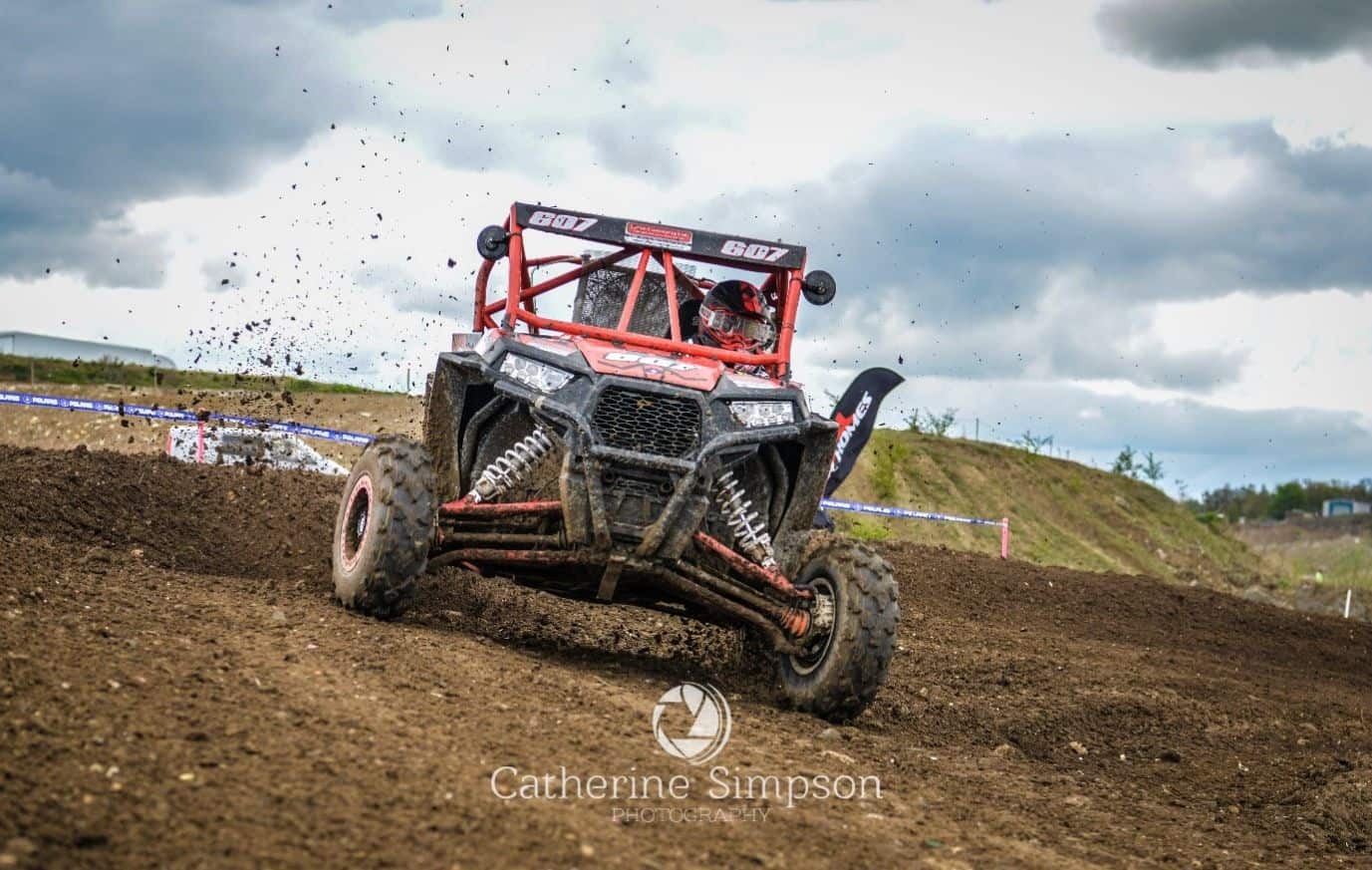 The Open Rookies really came alive at this event and the headline car was that of Andrew Postlethwaite, Andrew took the #1 machine to the top spot in the rookie class and beat several more experienced competitors in the process. Well done Andrew, we hope your good form continues. Next home was the Birdman, Jason Bird, and passenger Paul Blackford lapping consistently and driving to the conditions to bag some solid Championship points, they look to be contenders at the end of the year if their current form continues. Mark Rushton was next home keeping his challenge at the top of the championship table alive ensuring that even at this early stage of the year the class remains wide open.  Andy Bennett’s finish position didn’t reflect his pace, solid lap times should have seen him finish further up the field but some minor issues and multiple stops saw him settle for fourth. Charlie Welbourn took the steady away approach determined to finish after not feeling to clever in the days leading up to the event. A great performance showing there is a lot of life in the old dog yet. Jedd Wiegold was the next home proving that anything is possible after being tipped by most to be out in the early laps, his aggressive style makes for a punishing time for his machine but two hours later there he was. Well done Jed. Ross Jones took a box standard machine with only safety modifications which he had never driven off road all the way to the chequered flag. Well done Ross just goes to show that anything is possible and the machines are very capable out of the box. Nathan Bath and Joe Robinson were both unlucky suffering mechanical issues which meant their day was over but again the class is wide open so they will come again. Another great days racing in another class that is proving to be extremely competitive. 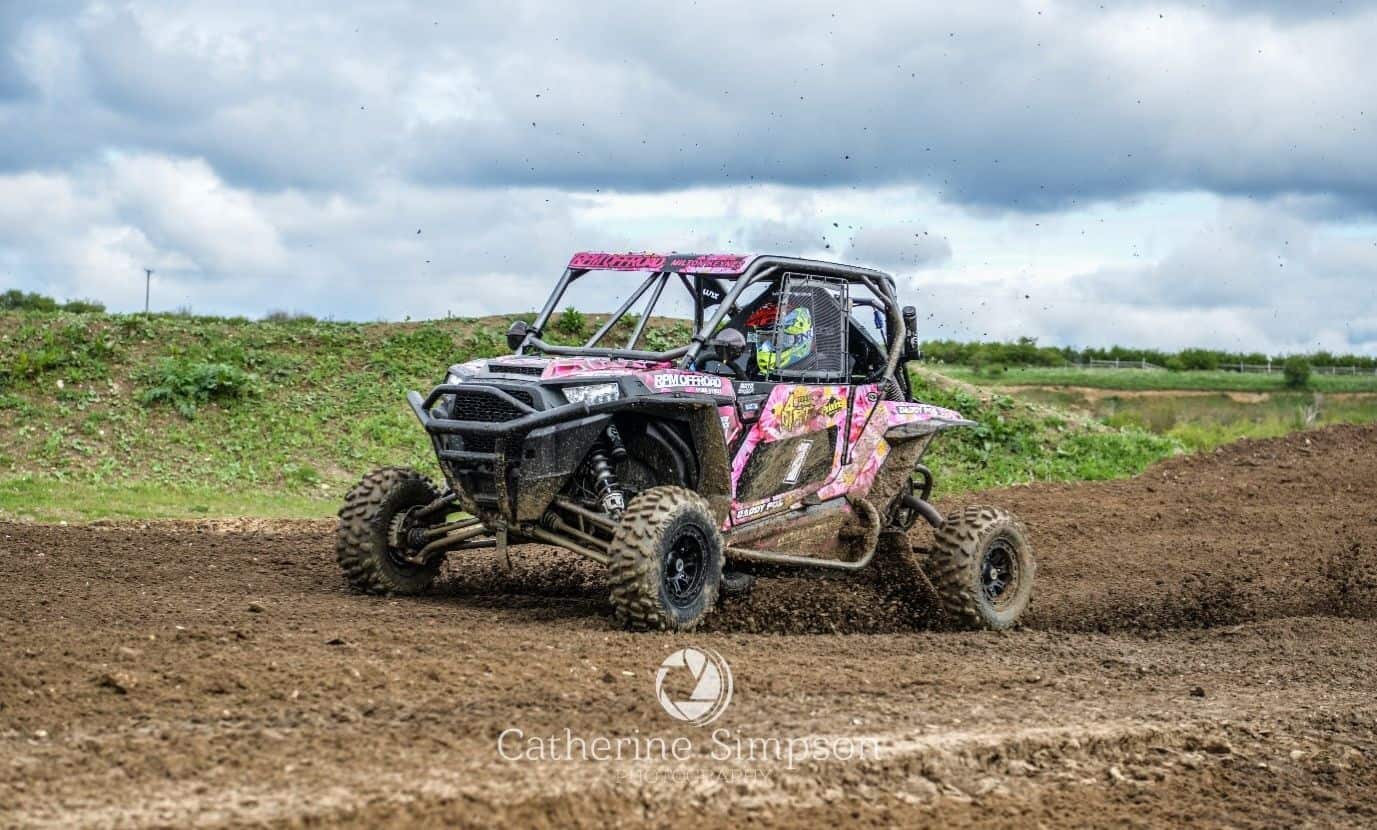 As always you couldn’t pick a winner in this class as they took to the line. Tom Fletcher and Richard Avis looked to take up exactly were they left off. That said during the race there were several leaders the most unfortunate of which being Josh Hope whose multiple stops saw him tumble down the field. Once Tom Fletcher got to the front he was staying there and top step of the podium was his. Mark McCann and Jayne Ind took the second spot after a consistent drive using all of Marks experience saw them in top end of the table the whole race. Richard Avis took a more conservative approach focusing on the finish and machine sympathy, however proved his ability by taking third even at a checked pace. Next in was Josh Hope who was the race leader for lots of the race however misfortune had its way and a prolonged stop saw him drop to fourth. The results see Tom Fletcher open a gap at the top of the table followed by Richard Avis and Mark McCann, this one will be a battle to the end for sure. 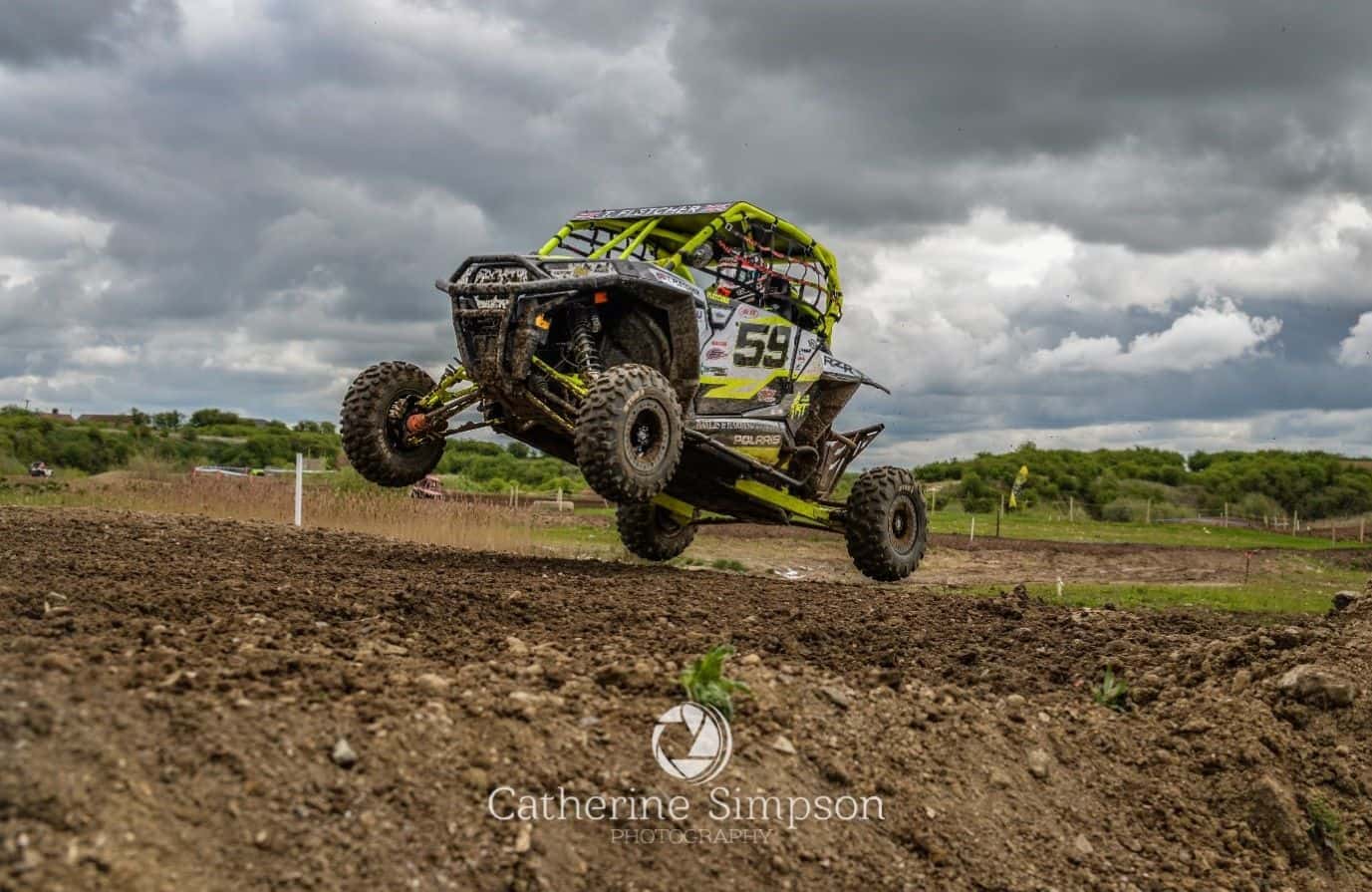 This class looked to be one of the most competitive on the day and it proved that in abundance. Mick Edwards proved that he’s still got it securing the class win with a fantastic drive battling the tough conditions and fierce competition. Kieran Weaver continued his good momentum this season with a solid second place keeping this class close for the remaining rounds. Chris McPhee was on top form until a broken CV saw an extended pit stop all but ruin his race, however Chris went out hard after his stop and set the fastest lap of the day twice beating even the more powerful machine and more experienced drivers.  Richard Burke marked the last of the finishers in what was a tough day for everyone.  No wind, lots of dust and true test of endurance on the track. Well done to all the drivers. 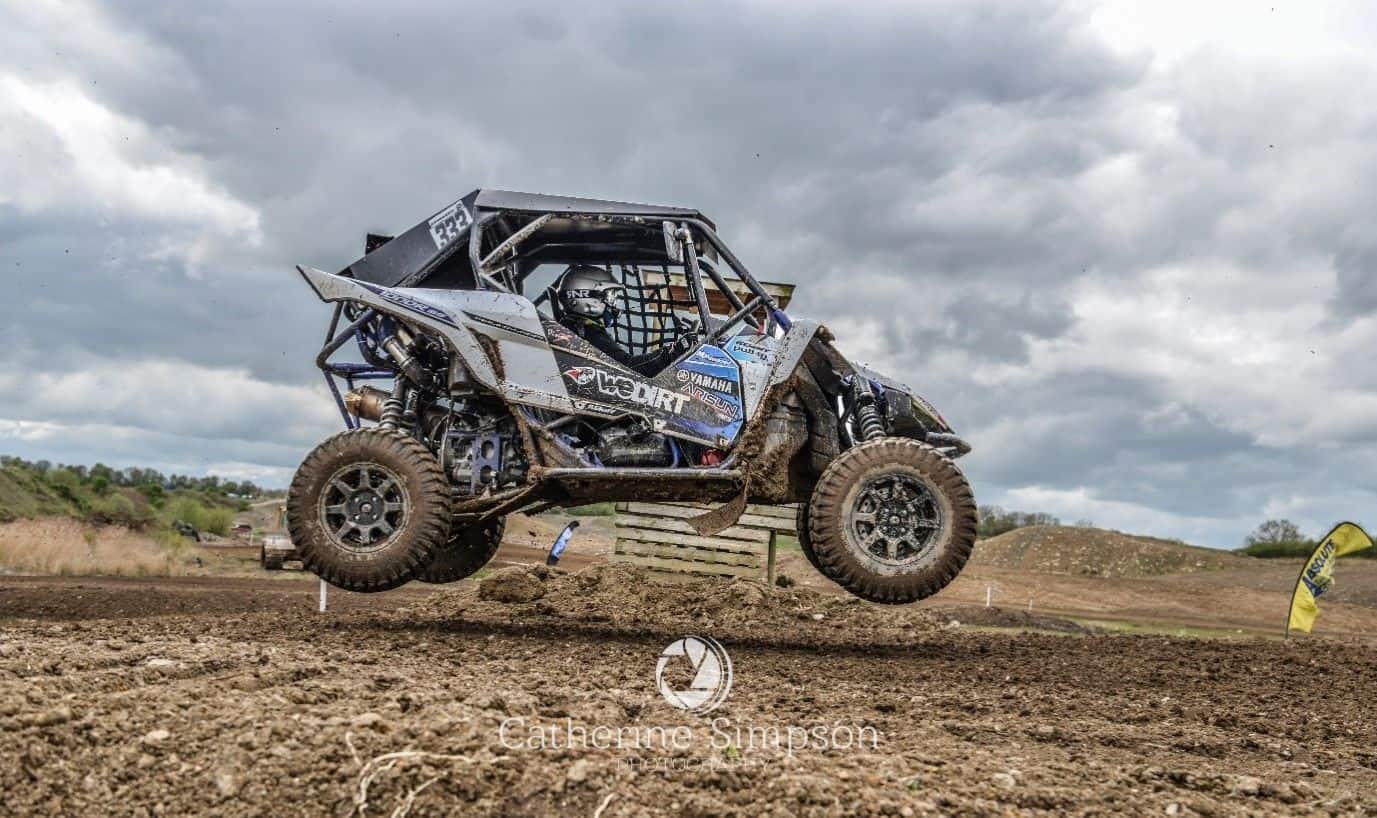 For the full standings see our results page HERE.

As always, we would like to thank everyone who made the event possible.

And as always, our sponsors who without their support none of this happens.